Before I get into a review of the event itself, I just want to mention that this was the first time I’ve ever received a pre-race info email that included a 16-page PDF attachment complete with runner demographic data, maps, sudoku, and a table of contents.

That is next level organization right there!

But when your start/finish area is located an hour away from the nearest cell signal (or paved road… or power outlet) it’s pretty reassuring to have all the information you need in one helpful, downloadable document. Thank you, Ultra Adventures Team!

There were also multiple pre-race emails reminding participants of the remoteness of the location and the need for extra logistical planning. I’m not sure if the frequent reminders helped or hurt me because I had a series of stress dreams about arriving late, missing the registration the night before, and waking up half an hour after the 6 a.m. 50k start time.

All that stress turned out to just be a waste of energy because when the big day finally came, I couldn’t have asked for a smoother race. I had so much fun and managed to hammer out a 50k PR while making sure I spent enough time soaking up the Grand Canyon views.

It was my first time there and I was just blown away.

I used my Avenza app and purchased the North Kaibab Ranger District map to get me to the parking/shuttle area. Honestly, there were enough other cars going the same way and signs to follow that I didn’t even have to worry about it, but I’m glad I had it just in case. (I get lost like it’s my job.)

After picking up my bib and indulging in some retail therapy, buying yet another trucker hat, I took the shuttle back to hunt down a good campsite about a half mile from the shuttle pick-up area. Later, I realized it was also along the last stretch of the 50-mile route.

When I woke up (on time) the morning of the race, my car dash said it was 34º. I knew it was going to warm up about 40º over the course of the race, so I stuck with my plan of wearing shorts, compression socks, a short-sleeved shirt, and my favorite Smartwool sleeves.

It was so cold that I had to sit in my car with the heat blasting and seat warmer on while I finished my coffee and got dressed. Luckily, there were campfires, hot cocoa, and a smores station at the starting line.

I thought this was a brilliant touch. If there’s a better way to warm up to a bunch of strangers than huddling together around a fire, I’d like to hear about it.

Once I made it to the start line with my bib fastened (#296, baby!) I had nothing left to worry about. I hadn’t studied the map very well, but I knew the course would be pretty easy with hardly 3,000 feet of elevation gain. After camping out in Flagstaff the week prior, running at 7,000 feet was not an issue at all.

The course didn’t go along the rim, or into the canyon. Instead, it was a loop of sorts with three out and backs to viewpoints on the 50k course (the 50M had four, and the half-marathon had two).

This was my favorite view and my favorite aid station. It was also the longest and most tedious out and back, so the reward felt that much greater in comparison.

A couple of weeks before the race date, we got an email saying the course had to be changed because they were denied a permit and that it would have, “less single track and more views.” I’m not sure exactly where they made the change, but the Thunder Mountain leg of the race was 12 miles on flat double track bordered by trees and tourists.

Maybe some people are into that, but personally, it felt more boring than a dreadmill. The way out was fine, but I noticed that most of the runners coming back in the opposite direction weren’t running at all. They were walking on this flat, easy road and it didn’t make any sense to me. I started to get worried about what kind of hell might be waiting for me at the end… but then a nice French man asked if he could run with me and we kept each other company while struggling to understand what the other one was saying.

Apparently French people don’t high-five, so he was taking advantage of every possible opportunity to slap some skin!

When we finally got to the aid station at the end, Frenchie and I stopped in the road to shake hands and formally introduce ourselves (his name was Fred) in what I imagine was a sweet Kodak moment that went uncaptured.

Our moment was shattered, however, by a large and loud race volunteer wearing an oversized top hat that swallowed his entire head. In fact, I think his head was actually just a giant talking top hat.

I’ve never felt so sad in my life. I mean, I was close enough to smell the watermelon.

But the trail was short and the overlook was… 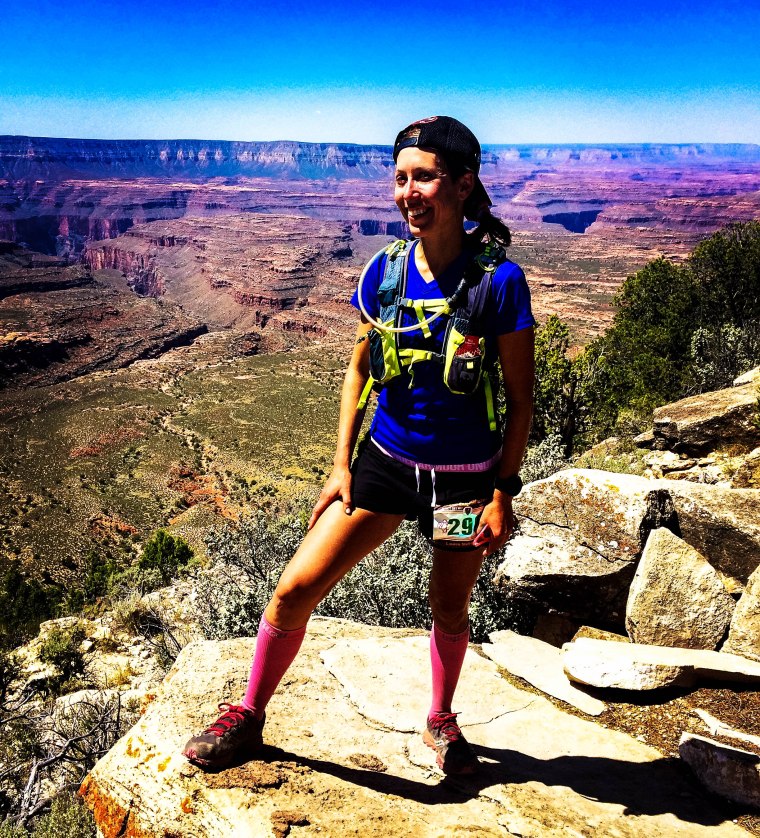 The volunteers at that aid station were the sweetest. They all had crazy hats and were rocking out to Rob Zombie. They were also the only station to offer ice and pour water over my head.

The energy I picked up there got me at least half way through the run back before the tedium (and heat) hit me and I started to walk.

Fred and I parted at the aid station. He told me he planned to walk the rest of the course because his achilles was hurting badly. He also said his physician warned him that if he ran the 50k his tendon would surely snap because it was so tight…

For the rest of the race, I used a trick I learned from my dog and slowed to a walk in patches of shade but ran through sunny spots. He’s a smart dog!

I wasn’t expecting any presents, but all the 50k finishers got a pair of sandals and a sweeeeeeeeeet mug.

After hanging out a bit, I got to see the 50 mile winner, Oswaldo Lopez, come in. The dude was so damn cute and giddy, I wish I had taken a picture with him. We sat next to each other on the shuttle back and he showed me all these videos he had the time to take of himself dancing on the edge of the canyon overlooks before anyone else got there.

I spent the rest of the afternoon lounging in my hammock, sipping cold beer, and reading a Western States memoir while occasionally shouting words of encouragement to 50 mile runners passing by.

I really appreciate all the hard work from Grand Circle/Ultra Adventures/Vacation Races crew (so much branding!!!) and volunteers and can’t wait to try all of their races! I’m especially interested in Bryce and Antelope Canyon. I was very impressed with their organization, communication, support for local native tribes, and dedication to maintaining an environmentally-friendly, zero-waste event.

Buy me a coffee

Enjoy my site? Buy me a non-dairy latte so I have the fuel I need to keep writing great content!