This story does not end well, but I’m going to try starting it off on a lighter note.

Since I’m recovering from a running injury, I decided to give aqua-jogging (yogging) a whirl. I bought myself a temporary gym membership and found an incredibly helpful list of aqua workouts for runners.

It was a bit awkward getting started, trying to get the funky foam floatation belt to fit properly without knocking off my bikini top, but after all the kinks were worked out, I was happy as a clam. Trading my crutches in for a floaty was a very positive step for my physical and emotional health.

It felt sooooo good to finally be able to use those muscles I’ve been resting for over two weeks now. Picture the look of pure bliss on a puppy doggy-paddling with a trophy stick in her mouth, or a toddler splashing around in her swimmies. That was ME! Running in little circles around the deep end of the pool, trying to avoid collisions with the other old ladies doing aqua-robics, I just could not stop smiling.

Yesterday, I tried out the gym in Weed for the first time, since I’ve heard great things about the salt water pool they have there. Soaking in chlorine for hours is not my cup of tea.

As I was getting my aqua workout on with the usual crew of old ladies, we all noticed the smell of wood smoke. Moments later, dark clouds of smoke blocked the sun from shining through the large glass windows. Since it was a pretty blustery day, the wind would blow the smoke in gusts. Blue skies one second, dark reddish-grey the next.

One of my pool companions decided to open the door marked “KEEP CLOSED” (that rebel) to scope out the scene. “Oh, it’s BAD,” she exclaimed, “I’m getting out of here!”

Being a newbie Californian, I don’t have very much experience with wildfires, but I did know that oftentimes the sky fills with so much smoke that you can’t even see Mt. Shasta. Naturally, I assumed that this smoke must be coming from a fire about an hour away. I was safe because nothing bad ever happens in my naive little bubble.

While the other pool dwellers hastily packed up and left, I delighted in having the entire pool to myself. I figured that if there was a fire, a pool was the safest place I could be. I mean, wildfire only floats on water in Game of Thrones, right?

But then, the gym manager rushed in to fetch me, warning that the building was being evacuated.

I spent a few years working in elementary schools and am very familiar with fire drills. However, all that practice must have slipped my mind, or I was far too deep in my imaginary bubble of safety, because I took my sweet time getting out of that pool. I even stopped to use the restroom, during which event the gym manager rushed in to the locker room, once again insisting I leave the building ASAP and appearing far more flustered this time.

Finally picking up on the urgency of the situation, I ran for the first time since breaking my foot.

As soon as I got into the parking lot, I saw towering flames and plumes of fiery smoke- right across the street. I’ve gone to burning man, but never in my life have I seen a wildfire up close. As much as I wanted to take a photo, my fight or flight instinct moved me out of there more quickly than my body would normally be capable of right now. As I drove down the windy road that leads to the center of town, small fires were blazing up on each side of my truck.

It was terrifying, but I did stop to take some photos once I was a safe distance away: 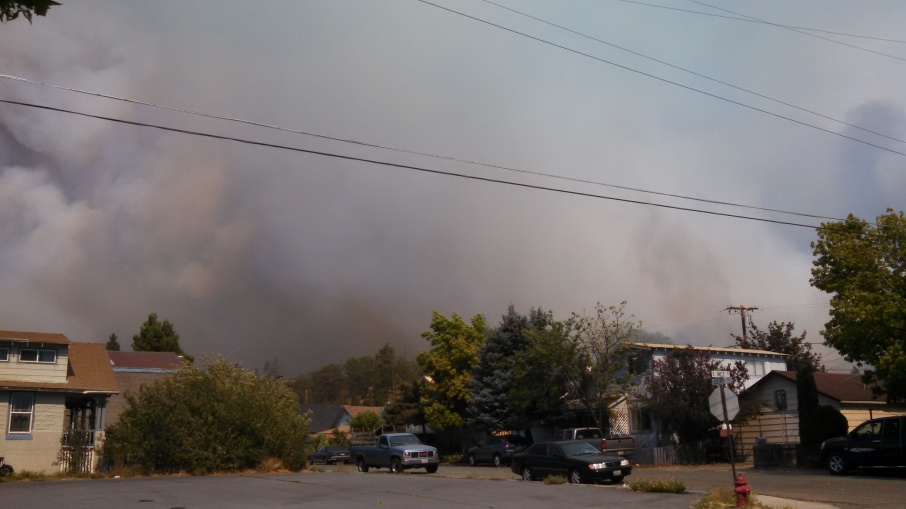 That hardly shows anything, but much better quality shots are available on other internets.

As I drive out of there, my brain struggled to comprehend the scene. Giant pine trees roared with hot angry flames directly behind the elementary school while a small group of teens strolled beneath an otherwise blue sky. My little safety bubble completely disintegrated. I was witnessing devastating reality.

At the end of the day, my mom texted me to check in on how my foot was healing. I replied, “Foot is getting better. I started aqua jogging. The gym I was in today burnt down, but I’m fine.”

It’s so extreme and close to home that I still get a little nauseous thinking about it. Nothing humbles the soul and incites charitable action like a disaster that affects thousands of people. Aside from a newly re-swollen foot and a major nerve-shaking, I am totally fine and counting my blessings.

My heart goes out to all those affected by the Boles Fire and I’m happy to do whatever I possibly can to help anyone in need.

Unrelated: there was a very confused bear wandering around the pasture yesterday!