A few days ago, I learned (or maybe was reminded) that Peter Buck, the guitarist of R.E.M., released a solo record in 2012.

Those who know me are already aware that R.E.M. has been my absolute favorite band of all time since I was about 10. I’ve even gone so far as to plan a whole road trip around visiting Athens, GA, where I visited the Wuxtry Records shop Peter used to work at, the railroad trestle the cover photo of Murmer was taken, and (of course) Weaver D’s Delicious Fine Foods:

I’ve always said that, if I had a time machine and could go anywhere in the past, it would be Athens, GA in the early 80’s just to be a part of that scene. Still holds true. (Not that I don’t LOOOOOOOOVE my Jersey music scene.)

My obsession with R.E.M. shaped my entire musical experience. I started listening to the Beatles, Rolling Stones, Velvet Underground, Patti Smith, Hüsker Dü and the Replacements because members of R.E.M. cited them as influences. I have no idea what kind of garbage normal kids were into at that time. I started listening to Minor Threat because I saw Michael Stipe wearing one of their t-shirts in a photo.

Side story: I remember purchasing my very own Minor Threat t-shirt in Hot Topic several months later. The guy who sold it to me said that I was the first person to buy one. I was 13 years old and paid for it with saved-up lunch money.

I never really had a favorite band member (and it was definitely never Stipe), until I saw them live. Watching Peter play guitar on stage reminded me of watching my friends play at Elks lodges and VFW halls for sparse crowds. At a time when his band was clearly churning out crappy albums just to fulfill a record contract, it appeared as if Peter never forgot what made him want to do this in the first place. In short- Peter Buck defines rock & roll to me.

I had to get this freaking record. Not only because I expected it to be great, and because Corin Tucker (of Sleater-Kinney) and Mike Mills (of R.E.M.) are on it, but because this was a vinyl-only release limited to 2000 copies. I’m leaving for the northwest in about a week and am not planning to take my record player with me.

I had to drive about an hour to get to Vintage Vinyl, the nearest record store that had a copy in stock. (oh, Brooklyn, how I miss thee.) I brought some unlikable CDs and old DVDs to exchange for credit, and hunted around the shop for my record. I had to ask for help finding it, and the VV employee and I searched for several minutes before looking up and seeing RIGHT IN FRONT OF OUR FACES. I literally jumped in the air with delight! Might have squealed, too. I also picked up a CD copy of The Odds by The Evens, Ian MacKaye’s latest project (full circles, friends).

After I left the store, I met a friend for a movie and coffee. As much as I loved spending time with her, I couldn’t stop thinking about my new LP, and how badly I wanted to go home and listen to it. It was like a date. I had driven a long way and spent half the money in my wallet to get this record, and I couldn’t enjoy it until I got home and set up my record player. With most bands releasing their tunes in mp3 format available for instant download that you can burn, stream, an listen to anywhere, I couldn’t remember the last time I felt so much anticipation for an album. This is the way my parents must have felt when new Yes albums came out.. right?

I was able to listen to my new CD in my car (which has a BOOMIN sound system) on the long ride home, but I was still thinking about Peter Buck. **Also, thinking about how my new Bad Religion record must have been delivered to my brother’s apartment by now and how badly I want to snatch that baby up. Ahem.**

Even though I got home really late, I unpacked my record player and speakers, lit candles in my parents’ basement, and opened a bottle of red wine. I’m guessing that most people don’t think that buying a new record is an occasion that warrants opening a good bottle of wine.

Every day I thank god I’m not one of THEM.

My doubts that this LP would come with a digital dl code was affirmed the minute I looked at the liner notes, which read:

“This is analog music: recorded and mixed on magnetic recording tape… mastered by Rick McMillan onto a half-inch Scully deck at 30 ips; and finally cut to lacquer disc… utilizing a custom-made tape machine that requires no digital conversion.”

There ya go. I sat on the floor, plugged my decent headphones into my crappy speakers (there was no way I was going to listen to even one note on decaying audio equipment), and listened to the whole thing. Occasional pauses were made to take low-res photos of myself to document the event.

<3 <3 <3 Everything about this album supported my belief that this dude just freaking LOVES making music. Except, perhaps, the track titled “Nothing Matters.” That’s just plain bad. I appreciate its placement at the end of side 1 so that it’s nice and easy to skip over from now on. <3 <3 <3 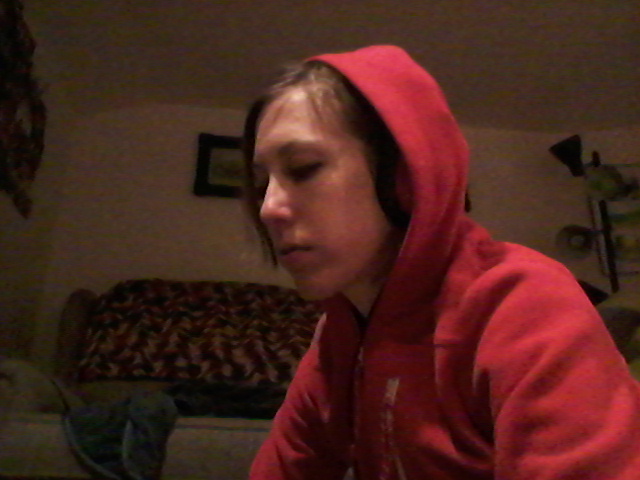 Evidently, I was so awestruck by the record that I forgot to blow out the candles. Mom left me a note this morning.