i run into trees

I had plans to hike in the pine barrens today with a friend, but when she had to cancel I was forced to rethink my plans. I’ve had some creepy experiences camping in the pine barrens that I’m going to force myself to recount in a later blog post by mentioning it in this one. This is where the legend of the Jersey Devil originates. It’s also *very* easy to get lost down there and I have the absolute WORST sense of direction I’ve ever encountered. Not two weeks ago, I got lost right here in the town I grew up in.

I determined that I’m just not ready for a trip into the pines on my own. While searching for appealing alternatives, I spent a lot of time perusing the Weird NJ web site as well as old copies of the printed magazine. The Princess Doe story caught my eye. I remembered the very first Weird NJ magazine I bought in high school, it featured Princess Doe’s grave in the cemetery section. I’d never noticed that her body was found on my birthday!

Princess Doe lies in a cemetery in Blairstown, which is very close to some great hiking and creepy places, not to mention a wonderful friend who just recently returned from a four month trip to Nepal I was dying to hear about. Decision made- I left the house hoping for spooky adventure and ended up with all that plus free pizza! Win!

When I got there, I realized that perhaps today, the day after a snowfall, was not the most ideal time to search for her tombstone. If you check out the photo in the Princess Doe weird NJ link, you can see my problem. I had a map with the general location pointed out, but a lot of the smaller tombstones were just bumps in the snow. I started wiping the snow away from one of them and completely saturated the wool glove liners I was wearing. Wet, cold hands make Lauren sad. I wasn’t about to kick the snow off with my boot. No way. Problem.

While walking around in distress, I came across a snow bump at the very edge of the cemetery property, right where the map indicated Princess Doe should be. The corners of a grave blanket (and about a million other pieces of flair) poked through the snow. I stood next to the site and looked down. I felt sick. I did not want to touch that grave. I moved to a different section of the cemetery, trying to convince myself that couldn’t be the grave I was looking for because it was the only one that didn’t want to be disturbed.

But I kept looking back. Eventually, I walked back to the site. Stood there. Stared at the lump, stared at the crows in the spooky tree, let out a few heavy sighs and then finally knelt to wipe off the corner of the stone. “July 15, 1982” and part of the word “strangers” was revealed. I jumped back to my feet feeling some relief that I had actually found the right one, which was quickly replaced by the same creepy nervous feeling I had earlier. I knew she didn’t want me there. This was a teenage girl who had had her skull bashed to pieces and her body dumped in the cemetery. Thirty years later, her identity and murderer are still a mystery. Though her grave was the most heavily decorated, all of the trinkets (as well as her coffin, plot and tombstone) were offered by people who didn’t even know who she was. She had to be PISSED. She is allowed. Who wouldn’t be?

Maybe this grave was more of an attraction than a resting place. I felt guilty, buuuut I wanted to clear more snow off from the stone. I tiptoed over to the other side and started gingerly wiping away the snow. My hand kept catching little objects. I felt like a giant claw was squeezing my lungs. I was messing with her stuff! “Oh man, I’m sorry!” I said out loud, leaning back on my heels and lifting my hands to block the invisible attacker. This is how I behave when no one is looking. 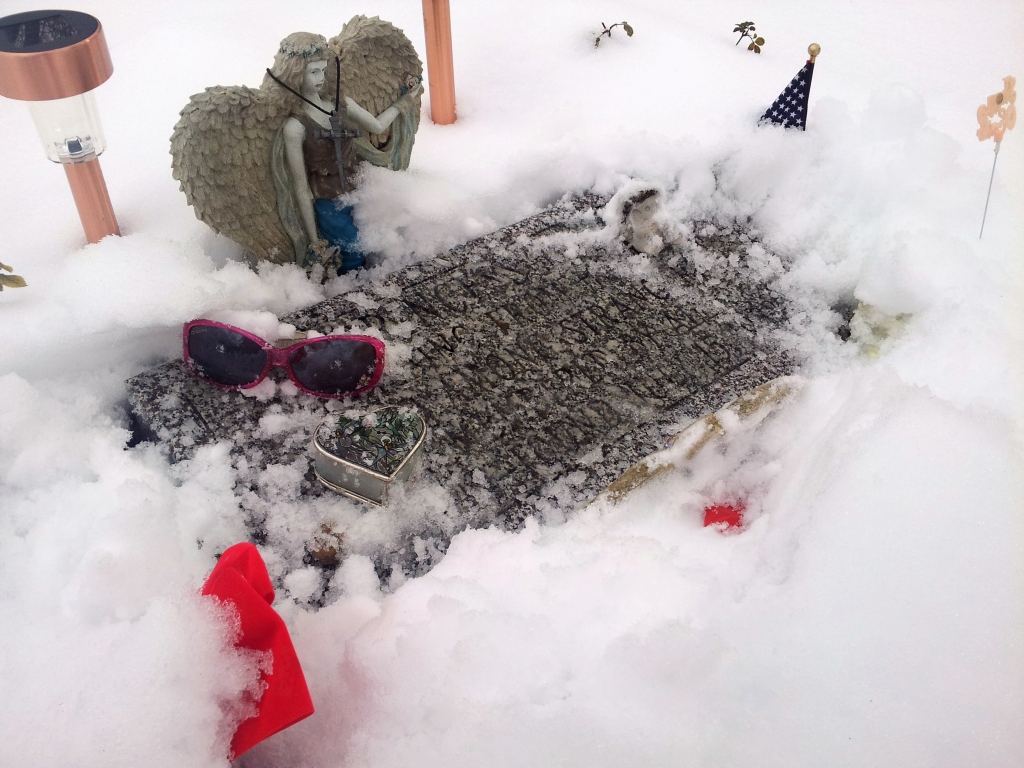 After carefully replacing her things, I walked back to the other side of Princess Doe’s grave. I felt much better, but embarrassed that I forgot to bring her any kind of offering.

**One lesson that has made my life much easier- GHOSTS LOVE GIFTS!** I don’t think it’s so much about the gift itself as being acknowledged and respected.

I thought about running back to my car across the street to search for something, but what was I gonna leave her? Some baby carrots and a library book? Thinking fast, I removed a pin a friend had given to me from my jacket. I really didn’t want to part with it, but I guess that makes it all the more significant. If I had brought her something I was just looking to get rid of, wouldn’t that be more like leaving trash on her grave? 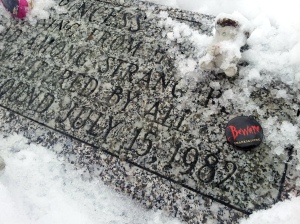 There. Now I had a valid reason for clearing the snow from her grave and I left her with a cool gift from a cute boy. She was very pleased. She even let me take one last photo. We are totally cool now. Feeling relieved, I skipped merrily across the street to this place called Cosmic Charlies where all the employees wore tie-dye and got some amazing pumpkin pie ice cream for second breakfast.

And later that day, I actually encountered a very friendly ghost.. like Casper but with glasses!!

My friend and I were walking along the Paulinskill trail, which is an old railbed running along the river of the same name. Side note- the Paulinskill trail stretches 27 miles and is a great pick for a nice, easy long run if you prefer to zone out and not worry about following blazes. We passed some old ruins, too. Definitely haunted- I’m convinced all old railbeds are.

We had been walking for a while without seeing any other people or human tracks when a man came up in the opposite direction. He was cute, in his late sixties maybe, and wore large glasses and high rubber boots.

“Hi!” My friend and I greeted him.

“It’s a GREAT day!” was all he said in response.

His head was kind of ducked low and he walked slowly.

Almost immediately after passing him, my friend and I came to a small bridge where we decided to turn around and head back.

About five minutes after we turned around, my friend pointed out that the guy had disappeared. We were on a straight, flat, clear trail (see below photo of my friend shaking this entire rusty bridge)

and the old man was nowhere to be seen. No sign he had ever been there. We turned around and walked back, but couldn’t find any human footprints that weren’t our own. We even walked all the way up to a giant shale rock that I distinctly remember passing before we encountered the man because I decided to break off a thin chip to nibble at. My piece tasted chalky, not at all like the baked Lays chip it resembled. I spit it out. My friend tricked me into believing that his shale chip tasted like bacon, but it totally didn’t. It tasted like da earth. Yeah, I eat rocks, so what?!

As it turns out, I have all the spooky snow fun I need right here in North Jerz! 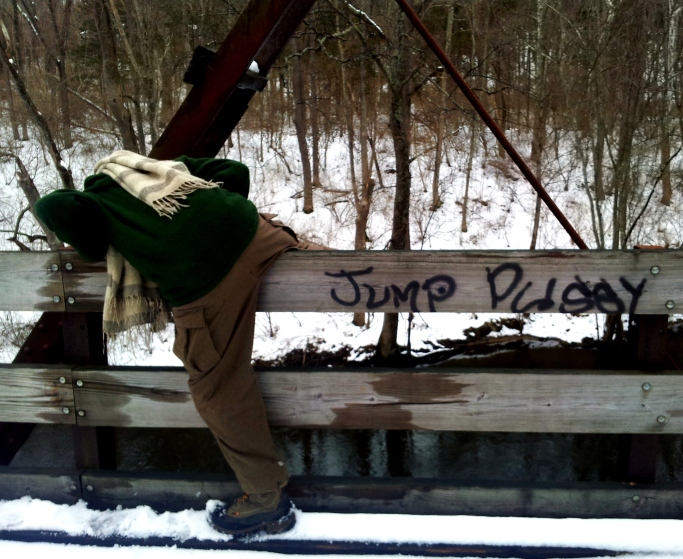 I don’t think he owns a bathing suit.